Newburgh officials move the first dirt in the groundbreaking for the first phase of the Lou Dennis Community Park renovation project. 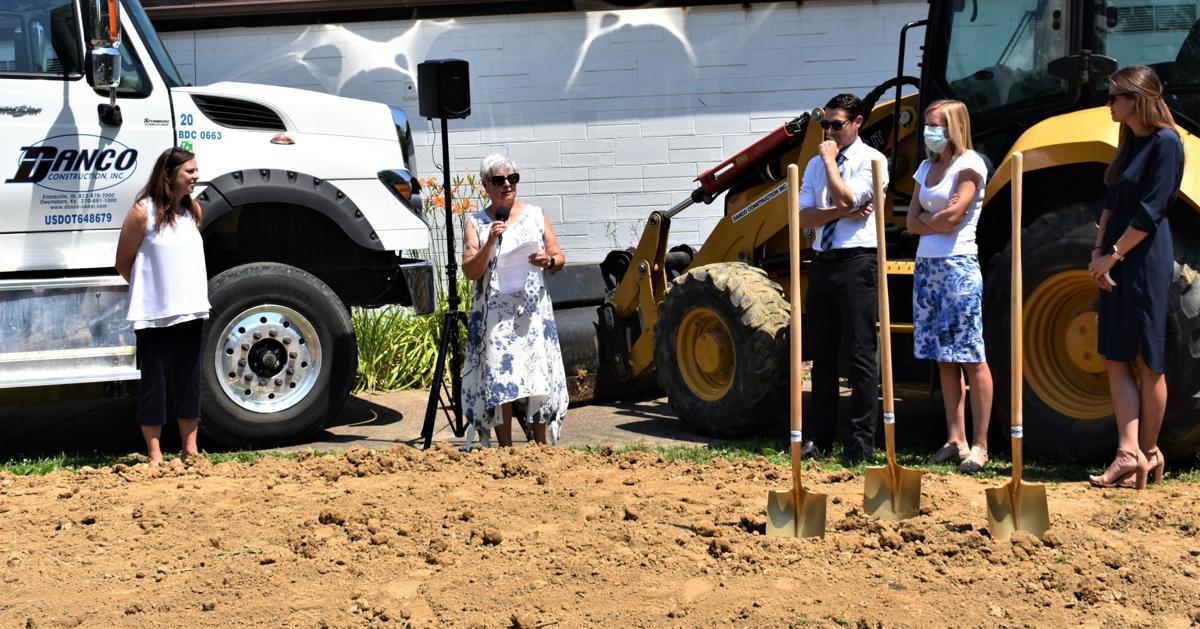 Newburgh Parks Board President Marianne Wilsbacher (center) speaks to individuals gathered at the groundbreaking for phase one of the Lou Dennis Community Park renovation project.

Newburgh officials move the first dirt in the groundbreaking for the first phase of the Lou Dennis Community Park renovation project.

Newburgh Parks Board President Marianne Wilsbacher (center) speaks to individuals gathered at the groundbreaking for phase one of the Lou Dennis Community Park renovation project.

Newburgh officials celebrated the beginning of the first phase of the overhaul of Lou Dennis Park.

The event on Thursday, June 18, marked the beginning of construction for the project. The project got started after Danco was awarded the project with their bid of $1,677,500.

The base of the bid for the first phase of the project covers the core of the park including the demolition of the old pool, the renovation of the poolhouse, the construction of the splash park and fun zone and improvements to parking and drainage. In addition, Danco’s awarded bid includes the relocation of the basketball court and east side parking as well as concrete stain, but will not include proposed plans for an additional pavilion.

Newburgh Facilities Coordinator Andrea Balboni said in celebrating the future of the park, it’s important to remember the input of previous Newburgh officials. She said the park wouldn’t be where it is without the dedication of the town over time.

“Today we want to celebrate the future of this park, but we also want to look back and say thank you to the past councils, the past parks boards and all the residents of Newburgh who, 49 years ago, had the forethought to make this piece of land into a community park,” she said. “Their actions, their fundraising and their donations led to this piece of property going from a single playground to a community park that continued to grow.”

Balboni said the common factor over time has been each administrator’s dedication to the park. She said the park has been and will continue to be a Newburgh tradition.

“Now, in 2020, we want to continue the tradition of enhancing the amenities in this park for the Newburgh community by breaking ground on phase one of the renovations,” she said.

Town Manager Christy Powell said the park has served as the backdrop to cherished family memories for decades, but the loss of the pool was a difficult challenge for the entire community.

“As we all agree, with the loss of the pool, the deep loss to the community was evident by the passion this town and even the greater community showed which became the catalyst we needed to imagine a new park with the knowledge that this community would support it,” she said. “It’s hard to look 50 years down the line when potholes need to be filled and payroll needs to be met, but we cannot truly calculate the value of the millions of moments and memories that we can only dimly see future generations creating here, the community bonds that will be forged and the uses and programming that will grow in the decades to come in this spectacular new setting.”

Newburgh Town Council Member Allyson Claybourn said she is passionate about the project because she has frequented the park since she was a child. She said she is motivated by the need for a safe place to play in the community, but she wants to help make the park better.

“I wanted it to get back to the best it can be like I remember it when I was younger. I think this project is a great step in the right direction for that,” she said. “This is going to be a facility for everyone in our community of all ages and all abilities and that’s going to make it a very unique place in this region. I’m really, really proud of us for putting those types of priorities at the forefront of this project.”

Newburgh Parks Board President Marianne Wilsbacher said she was influenced when she saw a child with disabilities watching other kids play at a playground. She said she decided then to make sure the renovations would be inclusive for children with disabilities.

“The look of longing on that child’s face broke my heart,” she said. “I made a personal vow at that time to help make our new renovations as inclusive as possible.”

Wilsbacher said inclusivity features like a sensory wall will give parents and kids the ability to continue to play instead of sitting out.

Wilsbacher said fundraising will continue to be important for the renovations and later maintenance at Lou Dennis Park.

“That is necessary for this park,” she said.

The first phase of the project which will cover the core of the park including the demolition of the old pool, the renovation of the pool house, the construction of the splash park and fun zone and improvements to parking and drainage. The Newburgh Town Council met after press time on Wednesday, June 24, and will meet again on Wednesday, July 8, at 5:30 p.m.