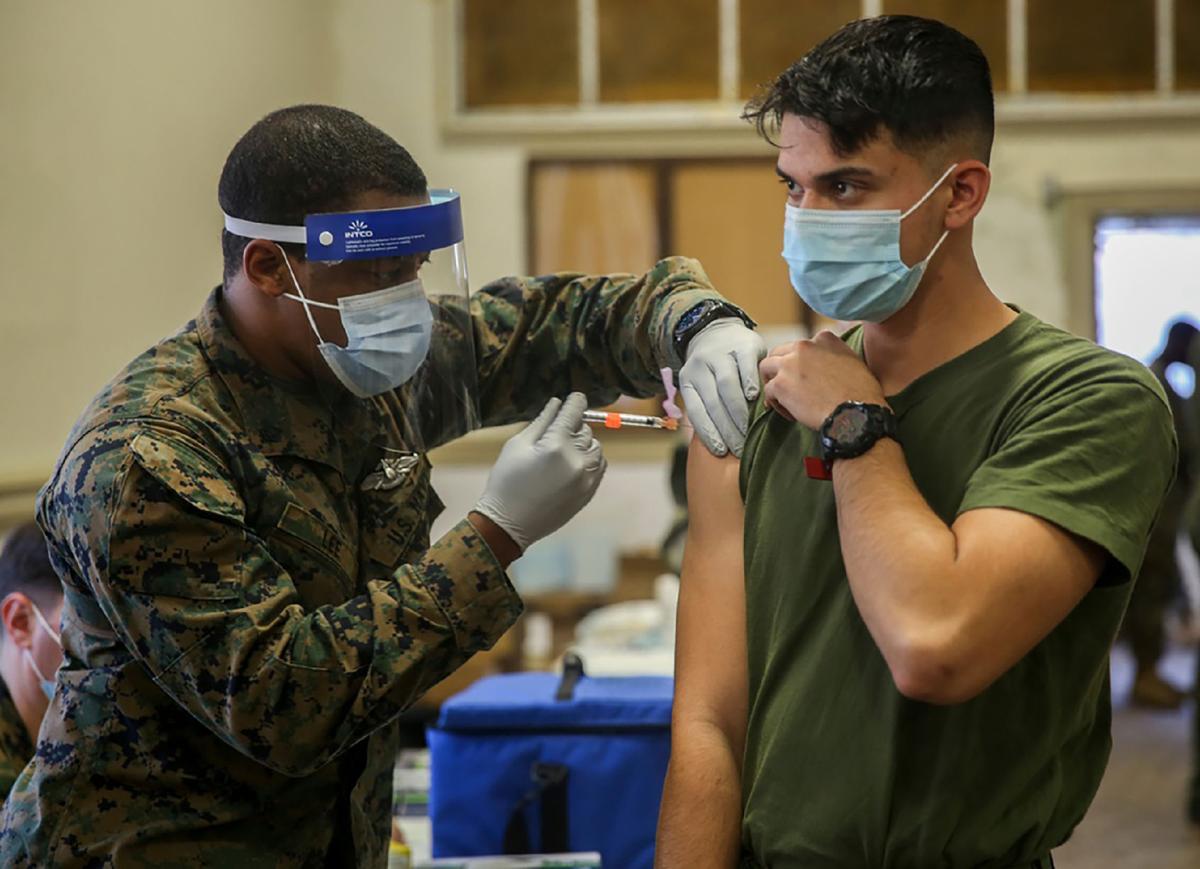 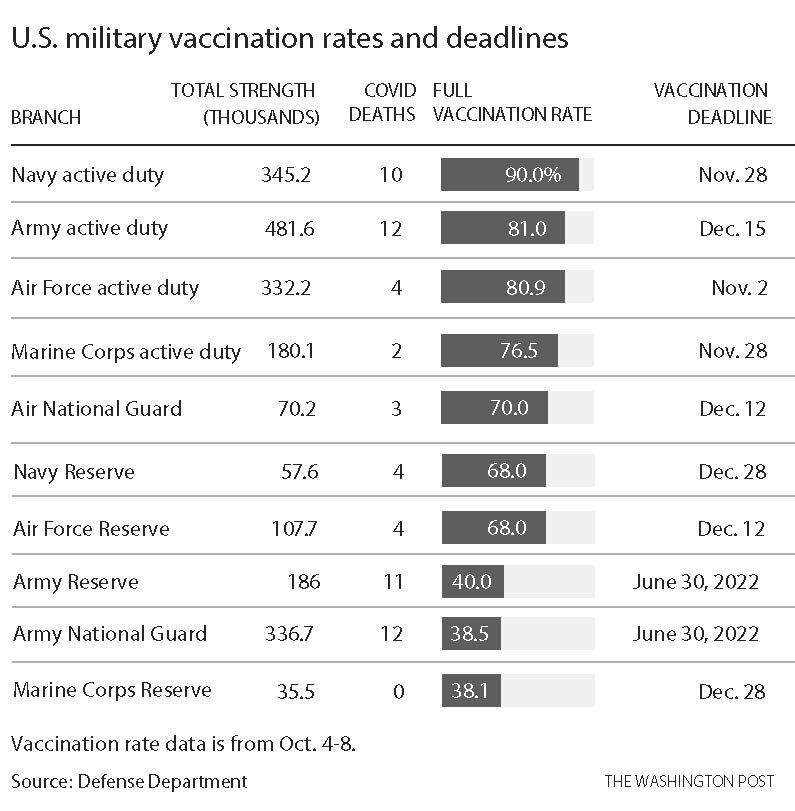 Hundreds of thousands of U.S. service members remain unvaccinated or only partially vaccinated against the coronavirus as the Pentagon’s first compliance deadlines near, with lopsided rates across the individual services and a spike in deaths among military reservists illustrating how political division over the shots has seeped into a nonpartisan force with unambiguous orders.

Overall, the military’s vaccination rate has climbed since August, when Defense Department leaders, acting on a directive from President Joe Biden, informed the nation’s 2.1 million troops that immunization would become mandatory, exemptions would be rare and those who refuse would be punished. Yet troops’ response has been scattershot, according to data assessed by The Washington Post.

For instance, 90% of the active-duty Navy is fully vaccinated, whereas just 72% of the Marine Corps is, the data show, even though both services share a Nov. 28 deadline. In the Air Force, more than 60,000 personnel have just three weeks to meet the Defense Department’s most ambitious deadline.

Deaths attributed to covid-19 have soared in parts of the force as some services struggle to inoculate their troops. In September, more military personnel died of coronavirus infections than in all of 2020. None of those who died were fully vaccinated, Pentagon spokesman Maj. Charlie Dietz said.

Military officials explain the variance in vaccination rates, in part, by pointing to the staggered deadlines each of the services set for personnel to comply while expressing optimism that, as those dates approach, numbers will quickly rise and a vast majority of troops will carry out their orders. Thousands of troops already have begun their two-shot regimens, like in the Navy, where 98% of active-duty sailors have received at least one dose, officials said.

But other services are not on such a steady path, and critics say the large gaps between vaccination deadlines jeopardize how ready the military can be in a moment of crisis. They point specifically to the reserves and National Guard, which over the last two years have been called upon in numerous emergencies — at home and overseas — and yet large numbers of their personnel have so far refused to get vaccinated.

“The Army’s policy is incentivizing inaction until the latest possible date,” said Katherine L. Kuzminski, a military policy expert at the Washington think tank Center for a New American Security, citing plans that require Army Reserve and National Guard personnel to be fully vaccinated more than eight months from now. Coronavirus vaccines have been widely available since the spring.

“The way we’ve seen the virus evolve tells us looking out to June 30 may need to be reconsidered,” Kuzminski said.

Combined, the Army Guard and Reserve comprise approximately 522,000 soldiers, roughly a quarter of the entire U.S. military, and they account for nearly 40% of the 62 service-member deaths due to covid-19, according to the data assessed by The Post. Barely 40% are fully vaccinated. The active-duty Army, facing a Dec. 15 deadline, stands at 81%.

Since the pandemic began, about a quarter-million service members have been infected with the virus, according to Pentagon data, including more than 2,000 who were hospitalized.

Troops in the National Guard and reserves serve part-time in uniform. But in the last year, as the pandemic, wildfires and civil unrest raged, the Defense Department and governors across the country mobilized more troops for duty than at any time since World War II. Those service members typically are older than their active-duty counterparts, and their civilian jobs or mobilizations may expose them to the virus more often than full-time troops who live and work on insulated military installations, officials have said.

In a statement, the Army defended the June deadline for its Guard and Reserve units, saying the date reflects how large those organizations are relative to other services and military reserve components, as well as the constraints imposed by the geographic dispersal of its members. Pandemic-related restrictions on in-person assemblies, such as drilling weekends, have added to the administrative challenge of processing so many medical records, counseling soldiers who remain skeptical about the vaccine and putting needles into people’s arms, said Lt. Col. Terence M. Kelley, an Army spokesman.

About half of Army reservists don’t live near military health clinics that administer the vaccine, Kelley said. Yet while the Reserve has instructed soldiers on how to upload records documenting any shots they receive from nonmilitary providers, there does not appear to be a clear public push from the Pentagon for soldiers to seek free vaccines from pharmacies or grocery stores when distance is a challenge.

Rep. Ruben Gallego, D-Ariz., a member of the House Armed Services Committee, said the Army’s deadline for its reserve units was “jarring” and could impact the service’s ability to quickly mobilize troops between now and next summer.

“I think the Army needs to take this seriously and their effort to explain away the problem” is irresponsible, he said. “You’re allowing a lot of room for people not to be deployable.”

The Army said Thursday that Guard or Reserve soldiers mobilized on federal orders after Dec. 15, the vaccination deadline for active-duty soldiers, must be immunized when they leave their home station. The order allows commanders to accelerate the June 30 timetable, but it would delay movement of any personnel who had not yet started a vaccine regimen, which takes between two weeks and a month to complete and be in full compliance with Army guidelines.

Military officials may have other concerns that limit how aggressively they push reservists to comply with the vaccine mandate, including lessons learned from past attempts to do so, said Trupti Brahmbhatt, a senior policy researcher and military health expert at the Rand Corporation.

The Air Force experienced significant blowback following Pentagon requirements for anthrax vaccine regimens in the late 1990s. The mandate “adversely” affected the “retention of trained and experienced guard and reserve pilots,” according to a Government Accountability Office sample survey cited in a 2002 report. About 16% of pilots and crew members in reserve units either sought a transfer to another unit to delay or avoid the process, switched to an inactive status or left duty altogether, the report found.

“The Army probably does not want to risk those retention problems,” Brahmbhatt said.

Defense officials have been reluctant to predict how many service members may defy the vaccine mandate. Republican lawmakers, including Rep. Dan Crenshaw, R-Texas, have suggested the number could be significant. “Question for the SECDEF: are you really willing to allow a huge exodus of experienced service members just because they won’t take the vaccine?” the former Navy SEAL tweeted last month, using an abbreviation for secretary of defense.

“Honestly, Americans deserve to know how you plan on dealing with this blow to force readiness — it’s already causing serious problems,” the tweet said.

Crenshaw’s office did not return a request for comment. A handful of Air Force officers have joined other government workers in lawsuits seeking to halt the requirement.

Troops’ receptiveness to the vaccine has varied widely, especially in Guard and Reserve units, which are less connected to the rigid top-down environment that governs daily life on active duty. Experts attribute that to broader societal attitudes — millions of American adults remain unvaccinated — as well as cultural traits unique to each service.

Kuzminski, the military policy expert, told The Post in August that one factor likely fueling the Navy’s comparatively high vaccination rate is last year’s outbreak aboard the USS Theodore Roosevelt while deployed to the Pacific. The incident exposed how rapidly the virus can spread among those living in tight quarters, and for many leaders it was a wake-up call when the ship was sidelined for two months after about 1,100 crew members were infected, including one sailor who died.

Gallego, a former infantryman in the Marine Corps Reserve, said demographics could explain why its vaccination rates trail the other services.

Marines, on average, are younger, predominantly male and, like many enlisted personnel throughout the armed forces, generally don’t have four-year college degrees, according to 2018 Pentagon data. All of those factors contribute to lower vaccination rates in the broader U.S. population by some degree, according to government data and surveys.

What polls don’t capture, however, is how many Marines and other combat-focused troops, compared to civilians who are the same age, generally are more physically fit and, as a consequence, may doubt the need to be vaccinated.

The Marine Corps declined to address why its vaccine rates lag the other services but said that in the six weeks after the mandate was issued, there was a 292% spike in the number of personnel who began a vaccine regimen.

“Marines who refuse the vaccine today,” a spokesperson said, “may choose to be vaccinated tomorrow.”