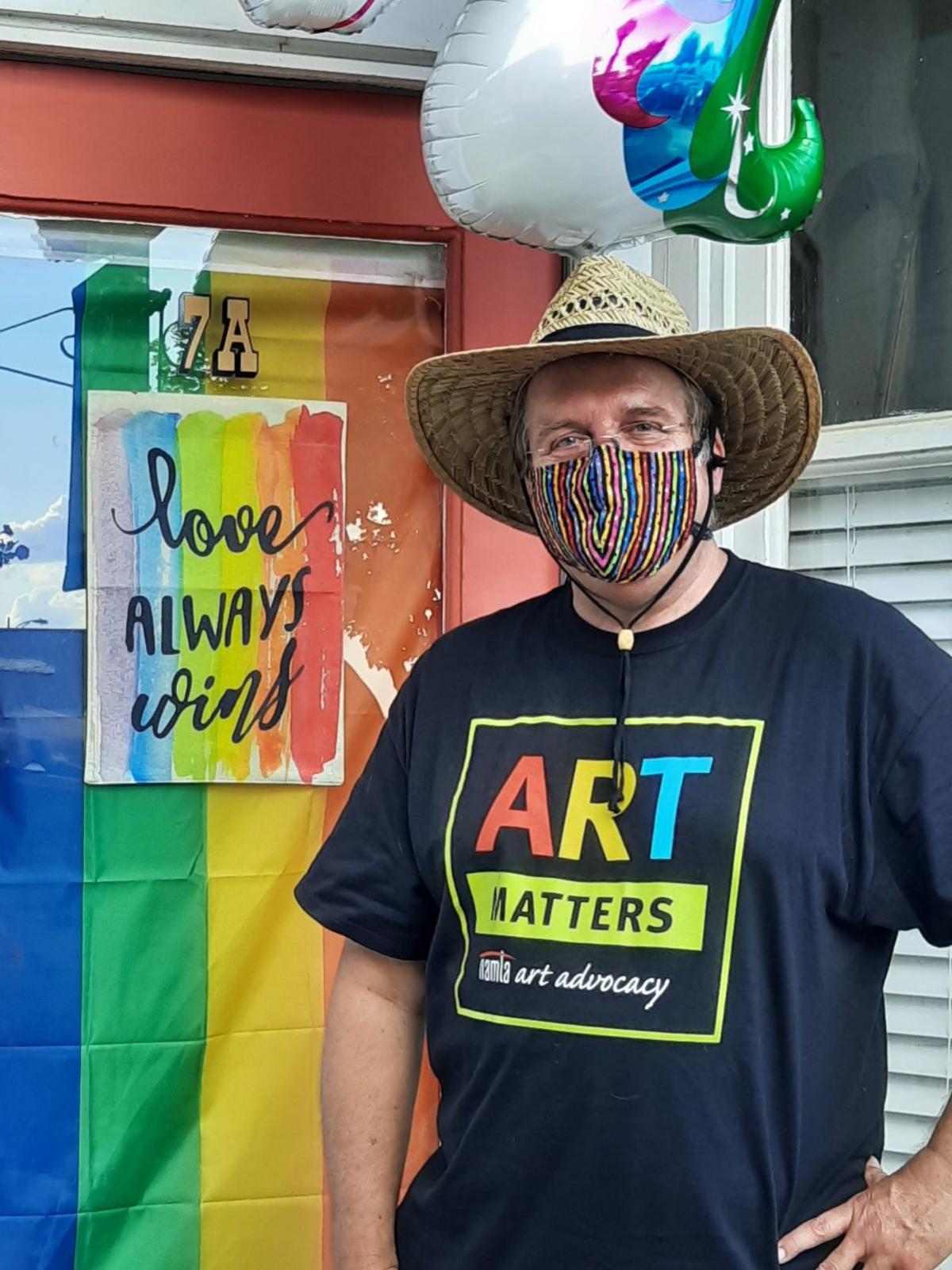 Newburgh resident and business owner Ken Oliver stands in front of his door and a new sign that reads "Love Always Wins." 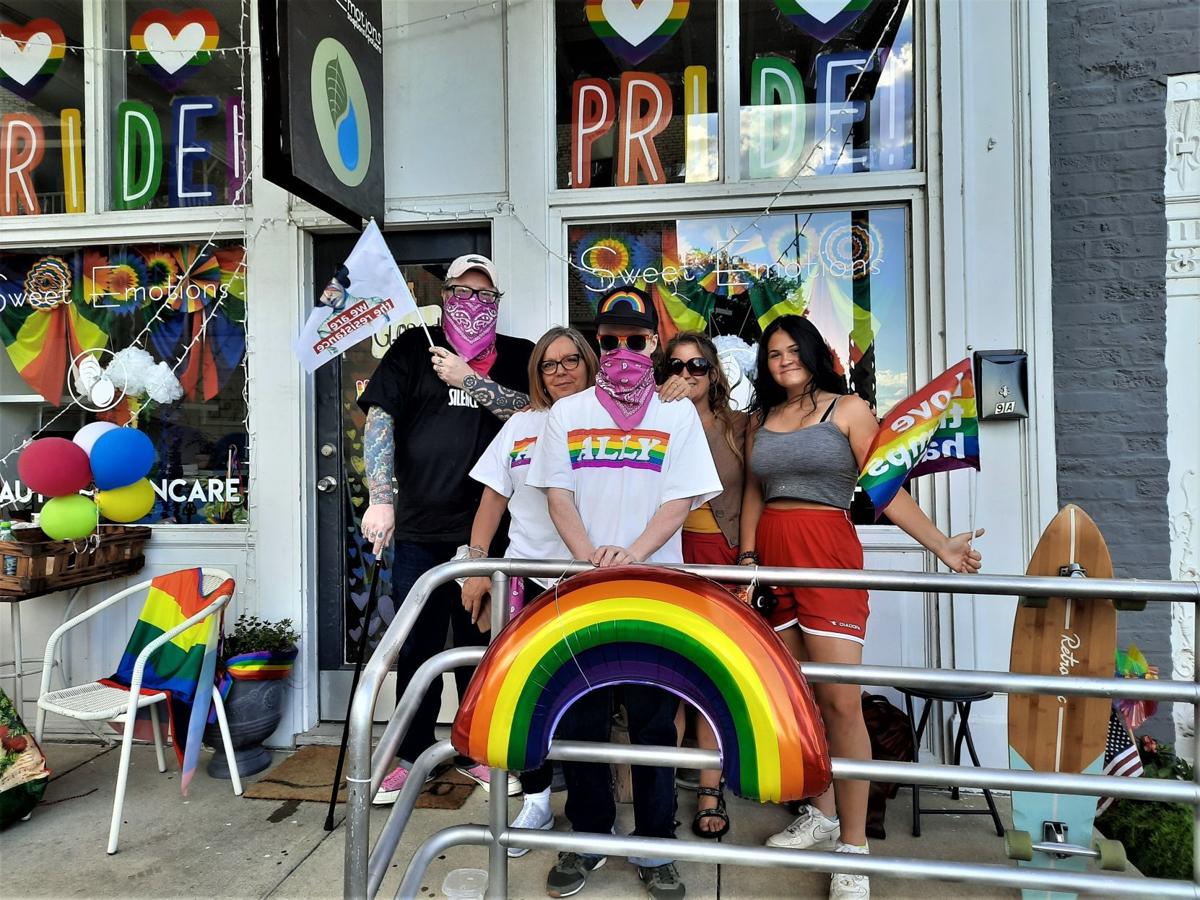 A group of neighbors display support for Newburgh resident Ken Oliver following the incident at his residence last week.

Newburgh resident and business owner Ken Oliver stands in front of his door and a new sign that reads "Love Always Wins."

A group of neighbors display support for Newburgh resident Ken Oliver following the incident at his residence last week.

The Newburgh Town Council read and approved two resolutions after a local resident and business owner was targeted by a homophobic letter.

The council passed Resolution 2020-11 to establish June as Pride Month in Newburgh which specifically references an incident that occurred at the residence of Newburgh resident Ken Oliver earlier in the week. According to Oliver, a homophobic letter stating, “The rainbow is a sign of God’s promise, not a symbol of man’s perversion! You shame Newburgh.”

Prior to reading the resolutions, Council president Stacie Krieger said the entire council was together in condemning the message in the letter.

“On behalf of, I’m sure, the whole town council, we actively abhor what happened to a local businessman Ken Oliver,” she said.

The resolution not only condemns discrimination on the basis of race, color, nationional origin, sex, sexual orientation and gender identity within the town, but also establishes a committee on diversity and inclusion.

Council member Steve Shoemaker said the resolutions are the town’s first step in making Newburgh a place people can be proud to call home.

Council member Carol Schaefer said diversity is something to be embraced. She said the resolutions represent turning a negative situation into a positive.

“The beauty of the Town of Newburgh is the diversity that is it’s people and we need to celebrate that,” she said. “I think that this is all turning something good out of something that was just horrific.”

Claybourn joined the meeting virtually from a rally following a pride parade. She said she is excited about the committee and she believes the resolutions are an opportunity for the town to continue to protect all of the town’s residents.

“My ask would be that the first task of this committee be to see what kind of teeth we can add to this discussion so that we are talking the talk and look into an antidiscrimination ordinance for the Town of Newburgh,” she said. “So that we make sure we’re protecting people of all groups and walks of life in our community in the areas of education, and housing, and real estate and employment.”

Claybourn said the town’s large rental population could be a target of discrimination and an ordinance could ensure that all prejudice is eradicated within the community.

“When we’re looking at these discriminatory acts, look at them as a whole as far as this committee is concerned and really take some action here to match the words that we’re putting forward today,” she said. “I’m so proud of our community and the council and everybody’s enthusiasm and support for Ken and the LGBTQIA+ community and all of the marginalized community groups in our community.”

In addition to Wednesday’s rally and resolutions, several of Oliver’s neighbors displayed their support with a display at the storefront. Amber Perkins, resident and owner of Sweet Emotions, said she decorated the store to support Oliver and to show that she is against homophobic actions.

“It’s ridiculous, it’s 2020. Everyone’s equal. We all should be loving each other,” she said. “It’s important for those of us that aren’t in the shoes of the Jeffreys and the Kens of the world to speak up on their behalf so that people know where we all stand.”

Neighbor Jeffrey Chapman said he has been an activist, but the letter hit him harder since it was so close to home. He said he was encouraged by the swift action of the council.

“So it’s important obviously for myself for personal and selfish reasons, but also because I live in the same building as Ken, it hit a little bit closer to home,” he said. “So, we thought it was necessary to show him our support and that’s what we’ve done. It’s that simple.”

Chapman’s sister and fellow neighbor Terrie Chapman said she has seen the kinds of things that have happened to people like her brother. She said everyone should be supportive and allies for LGBTQIA+ individuals.

“Because it should matter to everyone. I mean, we should all be allies. We’re all willing to serve together,” she said. “What happened to Ken, what’s happened to my brother throughout the years, should never happen. Whether it’s gay pride, black lives, we’re all here together and we all need to act like it.”

Oliver said he posted about the incident on social media, but he was not expecting the response that followed.

“Basically, I just took to social media, but before I knew about it the people from town council were calling me and people were calling me to apologize,” he said. “The outpouring of support made up for any kind of minor upset that it was because it really showed me how much Newburgh people care. It was actually pretty awesome.”

Oliver said people from all over the world responded to his post to show their support. He said the support he has received following the incident has completely changed his mind about his hometown.

“It’s the best because two days ago I woke up thinking that I lived in a community of hate and prejudice and discrimination and it was dangerous for me to live here,” he said. “Two days later we have proclamations that say June is Gay Pride Month. We have antidiscrimination and antiracism ordinances on the books now and protections. So, that’s awesome. That’s the best possible outcome for any of us to have.”

The Newburgh Town Council will meet again on Wednesday, July 8, at 5:30 p.m.