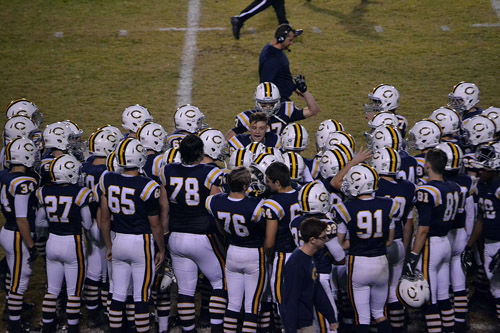 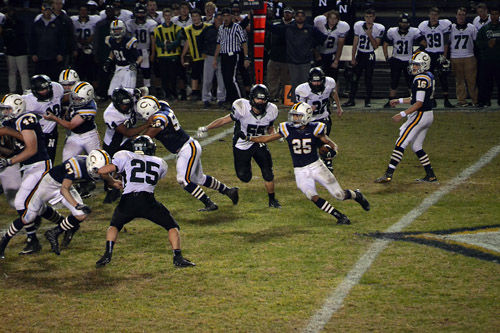 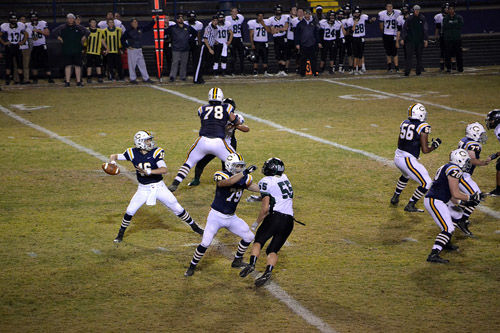 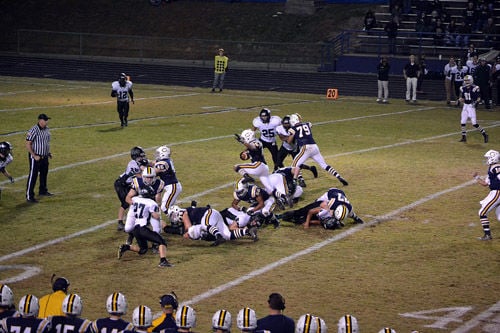 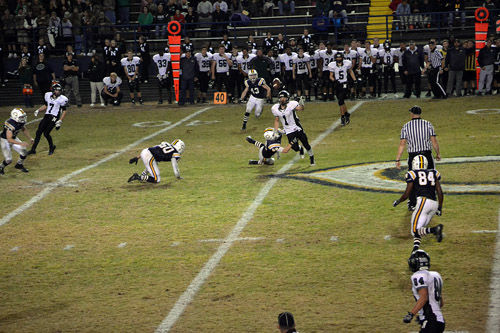 After sectional semifinals, the Knights will continue, while another season ends for Boonville.

The Knights defeated North, 21-14, at home Friday night, while the Pioneers fell to Harrison, 48-0, at home.

Castle had defeated North, 42-41, only three weeks prior to the sectional matchup, but still struggled against the Huskies. The Knights defense fought to hold strong against North from the get go, but the Knights offense had a hard time against the defense of the Huskies.

After punts from both teams, the Huskies were first to score with 3:29 left in the first quarter. With a 7-0 deficit, the Knights got the ball, but failed to move down the field and ended up punting against before the first quarter could wind down. North took back possession and held on into the second quarter.

The Huskies made a couple strong first downs before finally punting with nine minutes left in the half. The Knights didn’t wait to make good on this opportunity. Quarterback Dayne Keller first found sophomore Noah Taylor for a gain of eight yards. A handoff with no gain put the Knights at third and three. Keller found senior Noah McLean wide open. McLean caught the ball and carried it for a gain of 37 yards, leaving only 28 between the Knights and the end zone. Keller found McLean again, this time in the end zone to tie the game, 7-7.

The Huskies got the ball and started to move their way down the field until Castle’s junior left back Miles Burkins saw his opportunity and took it. Burkins intercepted a pass from the Huskies quarterback and carried the ball 45 yards, setting up the Knights to take over possession only 34 yards from the end zone.

The Knights immediately capitalized on their good fortune, with Keller finding McLean wide open in the end zone once again. The Knights took the lead with five minutes still left in the first half.

After two big sacks on North’s quarterback, the Knights defense forced the Huskies to punt again with just under three minutes left in the half, but the Knights couldn’t make much of the opportunity. Without a first down, the Knights were forced to punt with 1:20 left in the half. The Huskies lacked luck, as well. North couldn’t convert and wound up punting, as well, with 53.7 seconds left on the clock in the first half.

With almost a minute left, the Knights fought to widen the gap before the end of the half, but instead of gains, the Knights had blunders. On a first and 10 play, with only 26 yards between the Knights and the end zone, Keller fought to find McLean under pressure, but missed his man. During the play, the Knights were called for offensive holding and were brought back to the 42 yard line. On the replay of the first down, the Huskies broke through and brought down Keller for a loss of six yards. On the second down, North bought pressure again and forced Keller to throw the ball away. During the same play, the Knights were called for holding again and were brought back to their own 31 yard line. On the replay of the second down, the Knights faced a second and 55 play. The Knights tried to run a play handing the ball off to junior Jadrien Higginson, but were flagged for a false start and brought back again to the 26 yard line. On third and 60 with 14.8 seconds left on the clock in the first half, Keller handed the ball to Higginson but found no ground. In the end, the Knights took a knee on fourth and 60 to let the last remaining seconds of the first half tick away.

After their struggles at the end of the first half, the Knights came into the third quarter ready to take another shot at the Huskies. The Knights received first in the second half, but were unable to reach the end zone. With only 12 yards to the end zone, Keller tried to find McLean, but missed his mark. A hand off to Taylor covered some ground, but couldn’t get the job done. The Knights tried for a field goal but just missed and gave the ball over to the Huskies.

This time, the Huskies were going to take advantage of their possession. North hurried down the field before a quarterback keeper led the Huskies into the end zone with 5:03 left in the third quarter. The game was once again tied, this time at 14-14.

The Knights took back the ball and gained one conversion, but couldn’t get a second. On fourth and two, Keller handed the ball to Taylor, who leaped over the players still scrumming at the line of scrimmage, but couldn’t move the chains.

Castle’s defense kept North to a four and out before Castle took possession back with only 1:26 left in the third quarter. This time, Castle made it count. After four plays, Keller found McLean in the end zone with 22 second left in the quarter. The Knights took the lead again, 21-14.

North took their possession into the fourth quarter, but couldn’t make much of it. The ball would go back and forth throughout the fourth quarter, with an interception caught by Castle’s senior line backer Freddie Coudret and big quarterback sack executed by the Knights defense with less than two minutes left in the game.

The Knights took back possession with 50 seconds left on the clock. After two plays and two hand offs to Taylor, the Knights set up in victory formation and Keller took a knee to secure the win.

The Knights will go on to play Floyd Central at 7 p.m. Friday on the road for the sectional championship.

Wyatt Squires is a staff writer for The Standard. Before coming to Warrick, Wyatt has worked as a reporter in Jackson, Greene and Knox counties in Indiana.